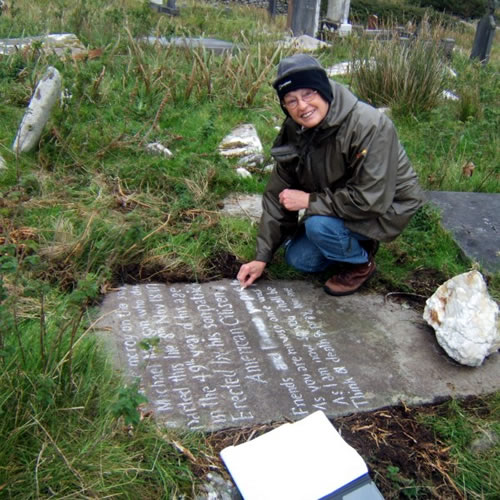 Theresa founded the Achill Archaeological Field School in 1991, the first of its kind in Ireland, with an emphasis on in-depth training and state of the art archaeological research. The School is a fully accredited Field School of the National University of Ireland, Galway. It has been at the forefront of historical archaeology in Ireland with its pioneering project on the ‘Deserted Village’ of Slievemore.

Theresa studied archaeology and anthropology at the Institute of Archaeology (UCL) in London where she received a BSc. in 1984.  She completed her MA in landscape archaeology at the National University of Ireland, Galway in 1988 and in 2014 was awarded a PhD by NUI Galway for her doctoral thesis entitled: Transhumance (booleying) practice in the Civil Parish of Achill. She has written three books on the Archaeology, history and folklore of Achill and in 2016 published a Guide Book to archaeological sites in Achill, Achillbeg and the Corraun peninsula. She has published several papers on the archaeology, history and folklore of Achill Island.  She is regarded as the foremost expert on the archaeology and history of the Achill Island. She is a Duchas licensed archaeologist and has worked on many excavations in both Ireland and Britain. She organizes and guides tours to historical and archaeological sites on Achill and Achillbeg Island.

In 2009 she was a co-founder of the Achill Historical and Archaeological Society (AHAS), which holds monthly meetings at the Archaeology Centre in Dooagh and elsewhere on Achill.

She is currently working on a major publication on the archaeology and history of Slievemore Deserted Village.

McDonald, T. 2016. The ‘Ups and Downs’ of Booleying in the Civil Parish of Achill. In M. O’Connell, F. Kelly and J. McAdam (eds.) Cattle in ancient and modern Ireland: farming practices, environment and economy. Newcastle Upon Tyne. Cambridge Scholars Publishing.

McDonald, T. 2016. A Guide to archaeological and historical sites on Achill, Achillbeg and the Corraun peninsula. Tullamore. I.A.S. Publications.

McDonald, T. 2010.  The Back of Beyond: booleying at Annagh on Achill Island. In A grand Gallimaufry: collected in honour of Nick Maxwell. Dublin. Wordwell.

McDonald, T. 1993- 2003. Survey of the Prehistoric and Historic Landscape of Slievemore. Interim Report submitted to National Monuments and National Museum of Ireland

Theresa has given lectures on the Archaeology of Achill and transhumance practice on the island in Achill, Mayo, Sligo, Galway, Dublin and Clare and in Northern Ireland, England, Scotland and the United States of America.

Theresa is a member of  –