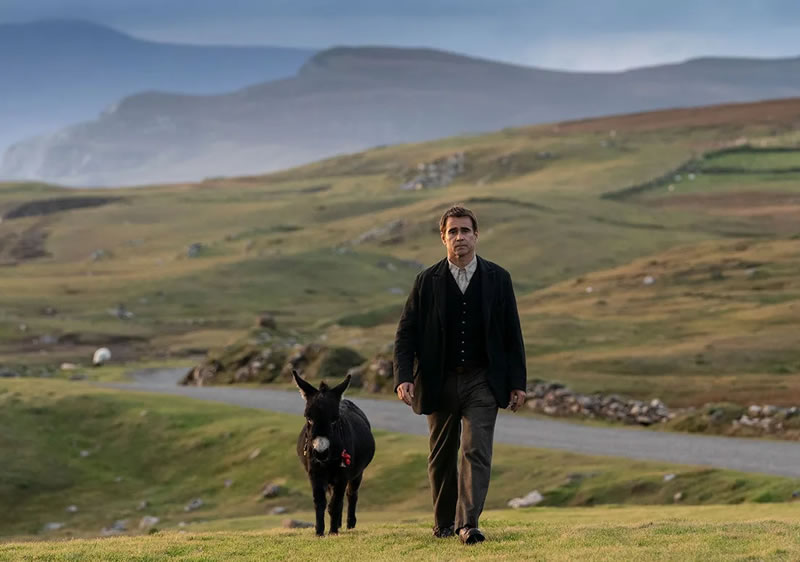 The Martin McDonagh movie ‘The Banshees of Inisherin’, which was largely filmed on location here on Achill Island, has won three Golden Globe awards.

Filming took place in late summer 2021 at six locations on Achill Island, as well as on Inishmore, one of the Aran Islands in Co. Galway. Among the locations used on Achill was Keem Bay, some 4.5km from our campus in Dooagh, and which has been the site of several excavations undertaken by Achill Archaeological Field School.

In the movie, Keem Bay was the location for the cottage of Colm Doherty (played by Brendan Gleeson) and also several moving scenes between Doherty and Pádraic Súilleabháin (played by Colin Farrell). The beach at Keem is also the location of the iconic poster shot used in publicity for the movie.

Another Achill location featured in the movie is even closer to our Dooagh campus. Corrymore Lake is just 4km from our campus buildings and overlooks the Tawnaghmore site that will be excavated in summer 2023. The lake at Corrymore was the location for Mrs. McCormick’s cottage and also two moving scenes involving Dominic Kearnery (played by Barry Keoghan).

Students studying and staying at Achill Archaeological Field School will be surrounded by the landscape featured so beautifully in the movie. Our campus is literally a stone’s throw from a beach at Dooagh, and in close proximity to the film’s locations at Corrymore Lake and Keem Bay.

View trailer for The Banshees of Inisherin: