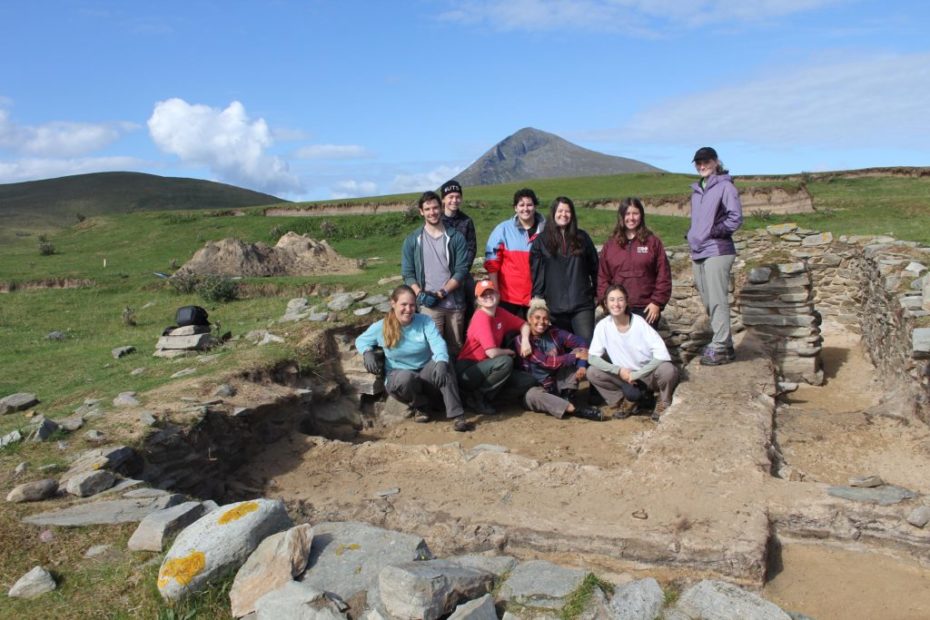 The house was a well-made structure built from beach stones bound with clay. It was oblong in plan with opposing doors set about one third of the way along the structure. The internal walls were rendered and there was evidence of a clay floor. The fire was set in the middle of the floor. The house was built directly onto the machair sand, and a mallet bottle found in a layer underlying the walls dates it to the mid-eighteenth century. One of the biggest surprises from the Caraun Point dig was the lack of ceramics. Ceramics are one of the most common finds on historical domestic sites, and their robustness and datability makes them very useful to archaeologists. Excavations at Slievemore (c.1750-1940) and Keem Bay (c.1750-1850) have yielded significant ceramic assemblages, so the relative lack at Caraun Point was unexpected. On closer consideration though, the lack of ceramics is not so strange.

Medieval Gaelic Ireland was largely aceramic. Although people knew how to heat up ceramics to very high temperatures (ceramic truyers were used during metal working for example) they elected not to make or use pottery to any great extent. Instead, wood, leather, horn, and other organic materials were chosen. The lack of ceramics at Caraun Point in the mid- to late-eighteenth century represents a continuity of this tradition. Other clues from the excavation indicate the use of wooden vessels at the site. We recovered significant quantities of heat-shattered sandstone beach cobbles from the layers inside the building, indicating that the stones had been heated up and immersed in cold water.  Hot stones have been used in cooking for thousands of years. In Ireland the prehistoric fulacht fia tradition is a well-known example. Hot stones or ‘pot-boilers’ are especially associated with contexts where wooden vessels predominated such as Scandinavia and the Baltic. Since it’s not possible to heat a wooden vessel directly on a fire, pot-boilders were used to heat the contents of wooden vessels by transferring the heat. This method is well attested more recently in Scandinavia, especially in brewing (Garshol 2014), but it has also been documented in places like Scotland (Highland Historic Environment Record 2018). At Caraun Point pot-boilers seem to have been used on a more everyday basis to heat water in the household for food preparation, washing or other activities.

More evidence for food at Caraun Point came from the butchered animal bone—largely sheep—and marine shells found in and around the house. Scraps of burnt marine shell and bone in the layers around the fire suggest the remnants of past meals. Our slot trench through one of the shell middens close to the site found clear dating evidence in the form of a tobacco pipe fragment and post-medieval glass bead, dating the midden to the eighteenth century. The midden was largely composed of winkles and limpets with smaller quantities of other species. It could have been associated with gathering bait for fishing, but some of the shellfish was certainly eaten as indicated by the burnt shell fragments around the hearth. We know that grain too was consumed at the settlement. A rotary quern for grinding oats or rye was found just outside the building. Finally, some of the most interesting finds from the site comprise four eighteenth-century green glass ‘wine bottles’ found from in and around the building. These objects indicate that the inhabitants from Caraun Point were connected to the wider world. The glass bottles in question would have originally contained wine, spirits or other alcoholic drinks.